Let’s assume the example greenhouse is a gutter connected, 2 bay greenhouse, 30’x96’ each, 60’x96’ total, with taller sidewalls, 10’-12’, just to give a frame of reference. Pun wasn’t intended but it works. The location is in the Midwest, let’s say…Indianapolis. It gets hot in the winter, cold in the summer.

The springs and falls are mild but can swing from cold to hot in an instant.

Cooling and heating are operated in stages in this greenhouse. The purpose is to keep a consistent temperature for the plants. The cooling and heating must be sized correctly in order to defend against max temperatures, lowest of the lows and highest of the highs. Sizing will be explained in upcoming posts. For now let’s say they are sized correctly for Indianapolis, that has a -15°F to 110°F yearly temperature spread.The ideal temperature for the crop being grown is 75°F, as the outside and internal greenhouse temperature drops, heat is needed. In the first stage of heating, one or two heaters come on, one overall or one in each bay, depending on how the staging in the controller was set-up. There are four heaters total. The second stage will kick on the remaining heaters if the temperature is not held with only two of the heaters running. The sizing of the heaters comes into play here, when all the heaters are running. There are many different sizes of heaters. The size is based off of the lowest temp., the number of heaters and the size of the greenhouse. This change in temperature is referred to as delta T. The delta T for this greenhouse heat is -15°F - 75°F which is 90°F. The heaters have to be able to compensate for this range. As the temperature rises outside the second stage of heating will go back down to the first stage then off. 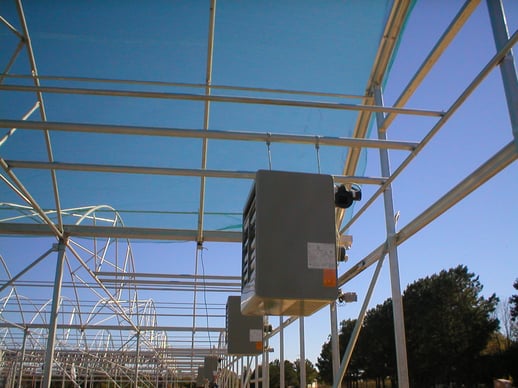 Cooling has more stages. In this greenhouse let’s use endwall exhaust fans and a rigid vent, an evaporative cooling system, upper gable fan and shutter and an interior shade system. When the temperature rises the first stage is turning on the upper gable fan and shutter. This pulls out the heat at the top of the greenhouse. If this isn’t enough the next stage is to close the shade system. This reduces the amount of light entering the greenhouse in turn reducing the amount of heat build-up. The next stage is to turn off the upper gable fan, open the rigid vent and turn on the endwall exhaust fans. If this still isn’t enough and the temperature still is rising the water pump is turned on in the evaporative cooling system. When the temperature starts to decrease outside the stages will back down until 75°F is stable. 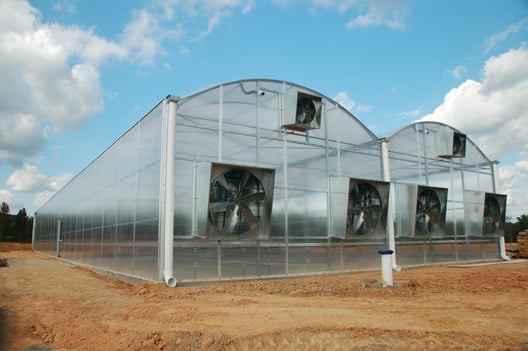 The heating and cooling staging is operated with a controller. The most common reader for the temperature is an aspirator (thermostat) that will often include a humidity gauge. The aspirator relays to the controller if there is a temperature change, the controller then tells the equipment what to do i.e. start cooling or heating. In the example above the heating and cooling smoothly ramped up and back down. This is rarely the case. Often you will see, at different stages, the fans (or heaters) come on, temp is lowered, registered as ideal, and the fans shut off. Then the temp rises again, fans come back on and again lower it to the set temp. The equipment will cycle on and off throughout the day and night, again depending on the temperature of the greenhouse.

Another part of the heating and cooling is air movement or specifically the mixing of the air in the greenhouse. HAF (Horizontal Air Flow) fans are used for several reasons. The two main ones are mixing of the air and air movement over plants*. In our example above the HAF fans will be on during heating and when exhaust fans are off. The purpose of environmental controls is to get even temperatures. HAF fans help my extending the reach of the heater blowers and mix more of the air volume up. When all other equipment is off the HAF fans help maintain an even temperature throughout the greenhouse. When the exhaust fans are on we are wanting to pull air out of the greenhouse and the HAF fans are not needed. 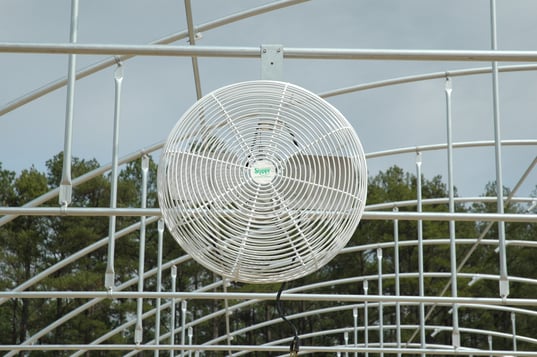 *Side note HAF fans are also used for air movement over the plants. This helps by increasing the drying time after watering and/or reducing the humidity levels in the plant canopies. Growers want this because it reduces disease.

This is a quick overview or intro to equipment staging but what I hope comes across is the concept of moving from stage to stage. Comment if you have any questions.