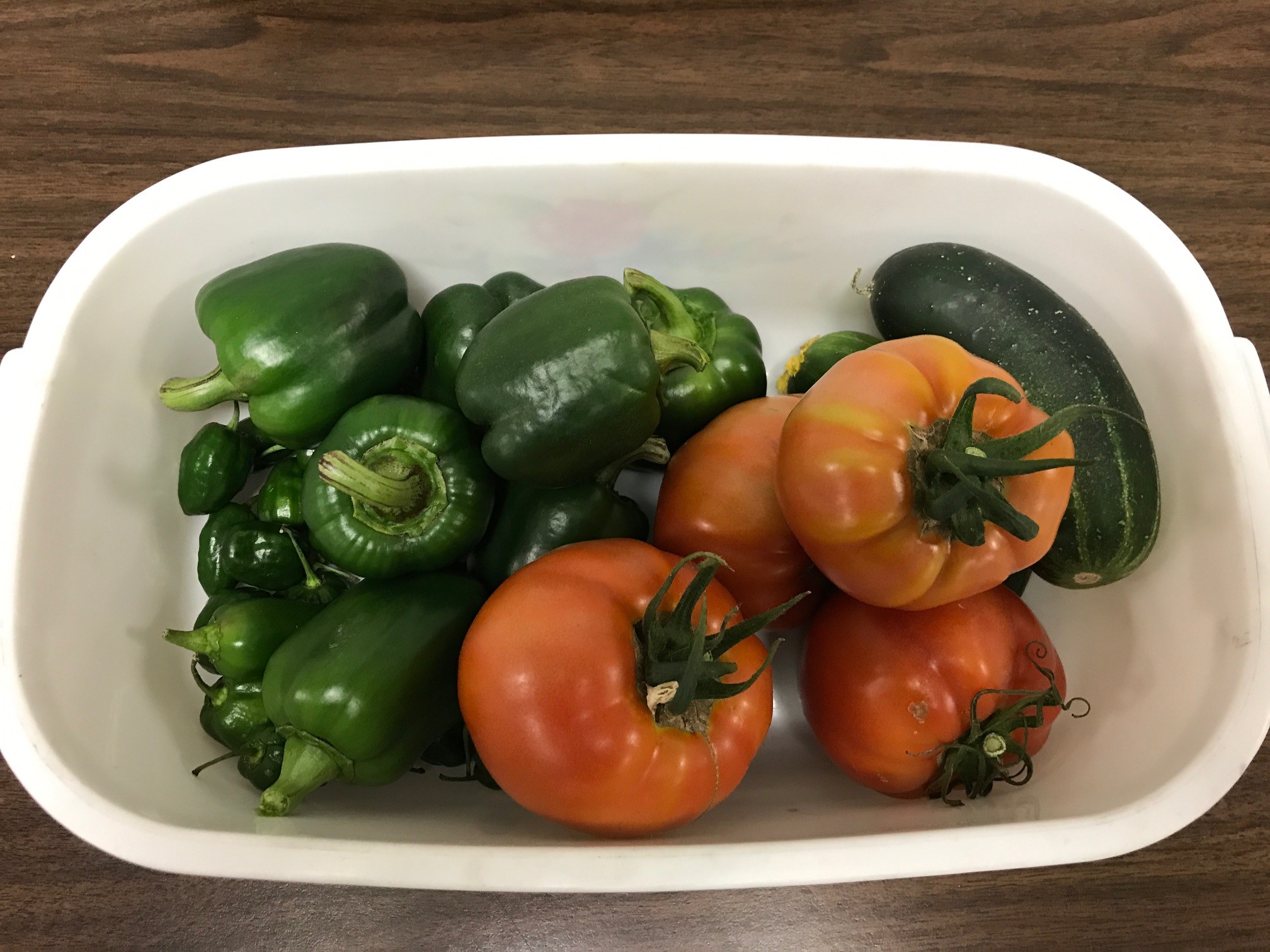 All fruiting crops are producing with success,  with the majority of current issues related to lack of adequate PAR lighting in our warehouse environment. Vegetative growth is slightly more prominent but not significant enough to affect the fruit development of the various crops.

No carbonate additions have been required over the past month. The likely cause is that the crops are having an effect on pH. This has not affected the production of fruiting crops within the system and they appear to be receiving enough nutrients over time. A water quality test is being conducted to determine how the K, P and Mn levels have been affected over the last month.

The efficiency of the clarifier was recently tested by determining the total water volume dumped from the media bed into the sump bed. The more waste build up in the media bed that had occurred over time the greater the loss of water volume and therefore the lower the change in water height in the sump after a given media siphoning period.

I determined that 4.125” increase in water height in the sump was the maximum drainage that could occur from the media bed. After a 4-month period the test was repeated and it was discovered that the drainage decreased to 3.5” (or a 0.625” drop; 15.15% decrease in water volume), not too bad considering the buildup of root material that is also taking up considerable space.

Unfortunately, the fish feeding trial will need to be redone as the feeder reset itself without notice. Overall the new catfish skretting feed appears to provide the best results with the lowest level of floating waste. The aquamax feed appeared to have considerably higher floating waste levels. The skretting feed will be re-tested first followed by the aquamax.

The fish have grown well and are averaging 625 grams/tilapia (nearly 1.4 lbs) as of 10/10, which is a reasonable 80-gram increase in size since the last weighing on 9/18. It has been 6-months since their introduction at 15 grams/fish meaning the tilapia are still well beyond their anticipated harvesting cycle.

Above is a comparison of the change in size of the tilapia over the course of the last two weeks with the first image image being from 9/18 and the second from 10/10.

We are still maintaining double what the tilapia should be weighing at this point in the grow cycle despite a constant 300 g/day feeding rate. This is proof that tilapia have a very flexible feeding requirement that can be manipulated to help the crops

The cucumbers and leafy greens have been removed from the media bed in order to make room for four new tomato varieties. These will be tested in the media bed under the LED fixtures this time. The same pepper individuals will be used to compare yields of LED vs Fluorescents. Below are images showing the change to the media bed.

Below are images of the float beds with each of the different artificial light sources (LED bottom). Each float bed now contains swiss chard and basil seedlings for a final comparison between LED and Fluorescents. The chard and basil will also be added to the hydro NFT system as well for comparison. The tomato seedlings are currently growing out in the LED float bed and will be transplanted to the media soon. 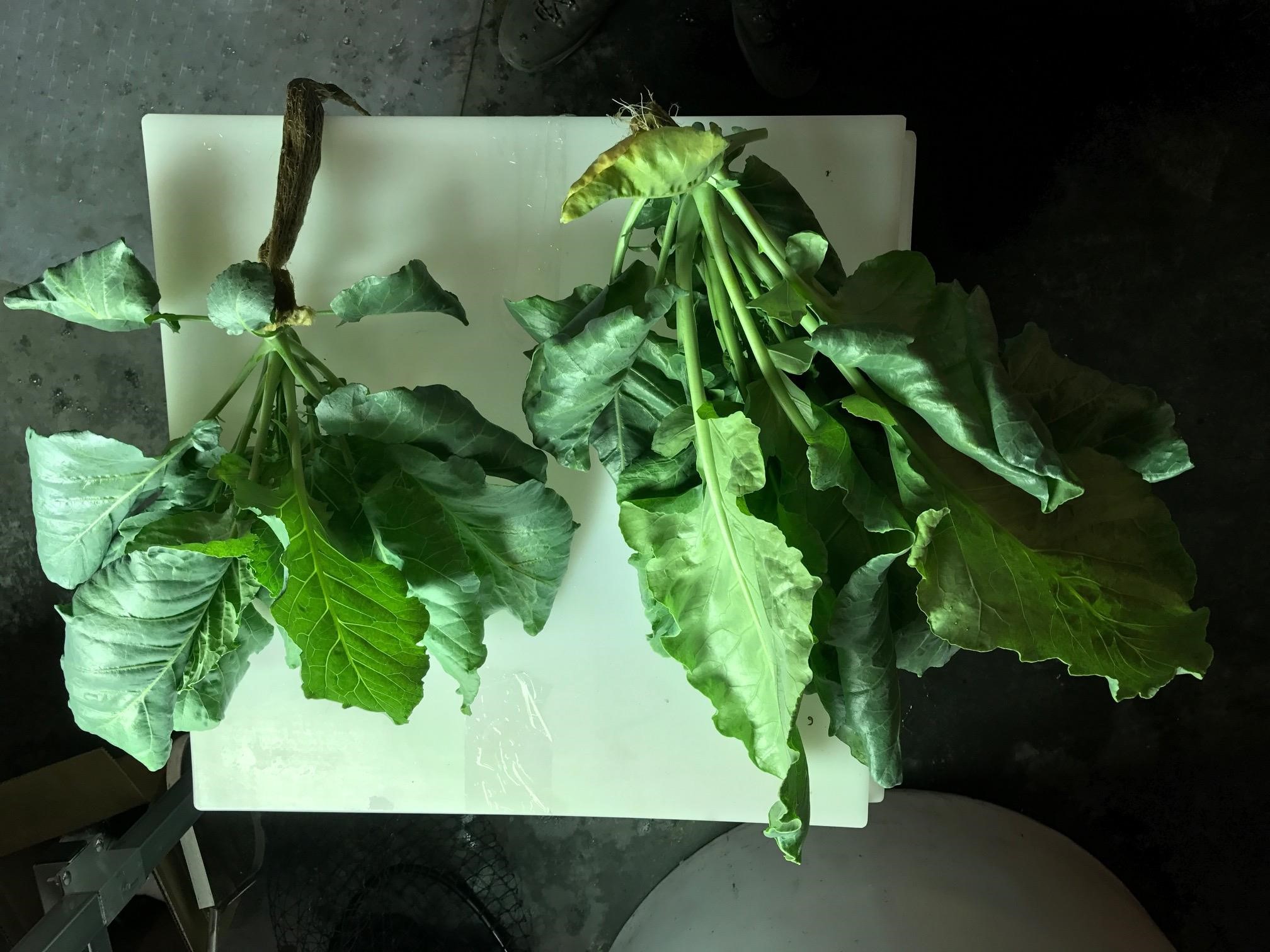 An image of the size difference between the collards grown by the LEDs (right) and Fluorescents (left, smaller). The LED fixtures have the ability to produce fully mature crops 5-7 days earlier than the fluorescent fixtures. Below is a table showing the harvest times for mixed lettuce and collards between LEDs and Fluorescents.

The numbers above represent harvest times it takes to reach the maximum maturity. In an LED set-up these leafy greens can be harvested a couple days earlier. Overall both Flourescent and LED provide more than sufficient light for optimal growth rates with the LEDs being superior and even outpacing the recommended grow time of 45 days for fully mature collards.

Since the clogging of the system on 6/11 and subsequent death of over half the fish nutrient and pH levels have remained steady. No additions other than 100 grams of chelated iron was added to the system in the last 2 weeks.

On 6/20 a water sample was submitted to JR peters Lab. As expected nitrate accumulation rates have slowed. Despite the lower waste production nitrate and EC seem to be remaining stable with a recently lab tested value of 140 mg/L NO3 (31.5 mg/L as N), more than enough to support the nitrogen needs of any crop. The lab test also gave us more exact K and PO4 levels which have only been rough estimates at this point; K = 33 mg/L and PO4 = 12 mg/L (or 4 mg/L as P). Although both levels appear to be quite low, especially compared with hydroponics, they have been adequate enough to support the growth of not only the two float beds of collards and mixed lettuce but also an entire media bed filled with various heavier feeding fruiting crops including tomatoes, cucumbers, cantaloupe, squash and peppers.  Boron levels are high and are the likely reason behind the discoloration of the cucumber leaves which is sensitive to Boron. Despite the high levels of Mn added to the system via MOST micro mix, Mn concentration are still far too low at 0.05 mg/l. Deficiencies have appeared, and for this reason, the fertilizer manganese sulfate will be used to increase concentration without affecting Boron or other potentially toxic micros. Below is a table of the full results:

The blue tilapia in the Niles system continue to feed at more than the optimal rate. The feeding rate has increased from 170 grams/day to 210 grams/day and fish size has increased from 125 grams/fish to 175 grams/fish. Using the avg. tilapia weight and the data generated by the graph below it was determined that they should be feeding at 2.19%. This is 0.67% lower than their actual feeding rate at 2.86% body weight which means they are consuming nearly 50 grams more feed than expected. Fish feeding rate is increasing at 0.476 grams/fish/week.

Based on the water quality, lower tilapia populations are actually more optimal for our smaller system.

All of the leafy greens are growing very well as anticipated. The LED float bed now has Asian leafy greens and the fluorescent float bed will be harvested completely on 7/05. From this point forward staggered production will be utilized to produce leafy greens and lettuce in the float beds. This will maintain a steady nutrient uptake.

In the following images you can see the change in crop size that has occurred over the last two weeks in the media bed.

The crops have been growing better than anticipated and even our tomatoes have recovered fully and are showing good growth. There is some leaf curling due to high heat loads in the warehouse which can’t be helped. The zucchini squash, cantaloupe and cucumbers are all producing first small fruits.

The LED and fluorescent trial results are in and listed at the top. Exactly as expected the LEDs produce at slightly faster rates. There was no significant difference in taste between the two grow methods although further testing will need to be done to determine the nutrient content of the tissue itself to see if a difference exists. With the LEDs producing stronger pigmentation it is likely crops grown under it will contain higher levels of various nutrients.

You can see the remaining collards in the Flourescent Float bed below.

Staggered production has already begun in the LED float bed and the same will be done in the other when the collards are harvest very soon.