The Genius of an Aquaponics Bell Siphon

The bell siphon is a simple yet effective way to allow the Aqueduct’s media bed to flood and drain.  Flood and drain is the process of continually filling the tank and draining the tank.  By slowly filling the tank with water the plant roots have enough time to uptake plenty of nutrients and water.  When the siphon drains it does so rapidly, drawing in plenty of air around the roots.  Both nutrients and air are important in the health of the plants.  Air is also very important in the health of the bacteria.  The media bed is the filter for the aquaponic system and it is essential that the bacteria efficiently process the fish waste.  By pulling in air as the tank drains the system has less of a chance of going anaerobic.  Anaerobic is when bacteria break down organic material, fish waste, without oxygen.  This process gives off methane and hydrogen sulfide, which is the rotten egg smell of anaerobic digestion.  In its basic function the bell siphon regulates the health of the bacteria, foremost, and plants in the media bed.  This in turn regulates the health of the entire system. 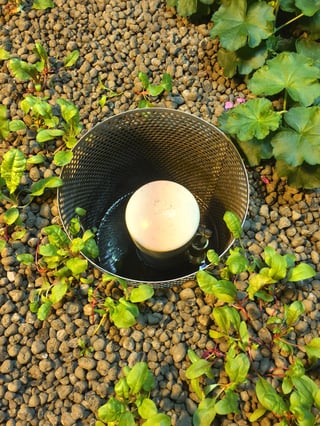 The Aqueduct is a recirculating system, water is continuously running through the system.  There are four tanks, a fish tank, a float bed, a sump tank and a media bed.  Water is pumped from the sump tank into the float bed then drains to the fish tank. The fish tank drains into the media bed and the bell siphon drains the water to the sump tank.

As the water fills the media bed, the stand pipe limits the maximum fill height of the water.  When the water rises it pushed air out of the bell housing and down the stand pipe.  Once the water level reaches the top of the stand pipe it begins to drain down the pipe.  This is the beginning stage of the siphon.  The water as it drains pulls the rest of the air out of the bell housing and begins to pull water out of the media bed up into the bell housing and down the stand pipe. This draining is at a rate that is faster than the incoming water from the fish tank.  The water acts like a chain and pulls water from above due to gravity and cohesion, or attraction of water molecules to each other.  The water continues to drain from the media bed to the sump tank until it reached the bottom of the snorkel tube.  The snorkel end rests in a small reservoir and as the water level lowers it reaches the height of the snorkel reservoir.  At this point the snorkel is only sucking water from the reservoir and drains it faster than the siphon drains the tank.  When the reservoir is empty the snorkel sucks air, this air breaks the vacuum in the siphon, shutting it off and allowing the tank to refill.  The end of the snorkel determines the minimum water height in the media bed. 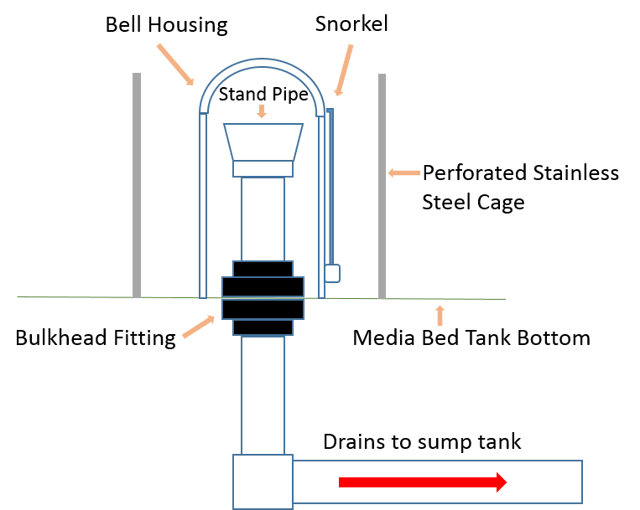 The bell siphon is not only an integral part of the Aqueduct but a fascinating feat of science.  With the ability to flood and drain a tank in a system with one pump greatly lowers the risks of failure.  The siphon runs automatically and consistently giving the plants a stable growing environment.  By having even flood drain cycles the plants receive even amounts of air and nutrients.