I will be restarting the experiment in mid-February which is a more ideal time to seed tomatoes as the air temperature and humidity should rise and be far more adequate for production. A lot of the damage the tomato’s sustained was due to the cold temp, low humidity and lack of light but overall some unexpected results were obtained as discussed below.

Currently I have left one aquaponic tomato and the artichoke to continue observing growth patterns. The tomato crop is flowering and will hopefully produce fruit soon. The overall quality of the vegetation should also improve with more light focused on this individual instead of three. The artichoke flower is continuing to grow larger and the crop looks a lot better overall with the photoperiod fixed.

The primary findings of this first bucket test were an interesting difference in growth between the hydroponic and aquaponics tomatoes as shown in the images below. 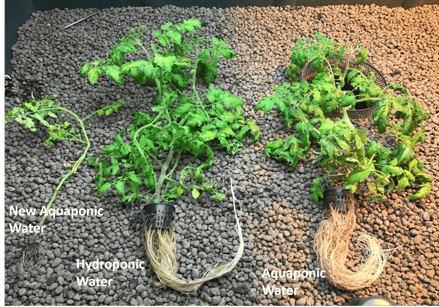 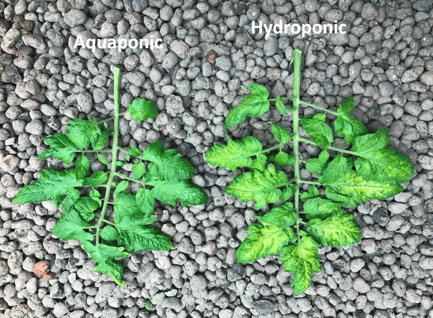 The hydroponic and aquaponics based tomatoes show relatively few differences initially but there were several that surfaced when compared directly side by side. The foliage of the hydroponic crop is discolored, yellowing towards the center of the leaves, this discoloration was found in the younger leaves as well so this is likely a micronutrient deficiency related to zinc or iron. This is bizarre however as a well know and developed hydroponic solution by General Hydroponics was used to feed the tomato. This does at least prove that our aquaponics solution has a more than effective concentration profile of micronutrients for vegetative tomato growth. Overall the hydroponic tomato was larger but this was more likely due to its proximity to the light source instead of nutrient concentration.