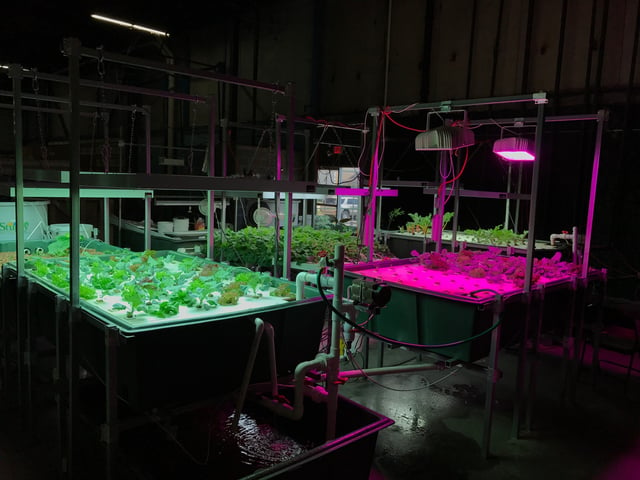 Above is an image of the Niles system taken on 6/12. Both float beds are growing very healthy mixed lettuce and collards with the LEDs producing individuals that were slightly larger and more colorful. The mixed lettuce in the further 2/3s of the LED bed had to be harvested 6/16 whereas the lettuce in fluorescent float bed will remain in place until 6/21 or 6/23. The collards will be left in the float beds until they are more mature and have been spaced 16” apart to allow for larger growth. The closer 1/3 of the LED float bed, previous seeded with mixed lettuce, was replace with a new variety of Asian leafy greens.

Since there is more than enough Mg available in the water MgCO3 was replaced with a slightly larger deposit of CaCO3 for the next carbonate addition added on 6/05. For the 950-gallon system more CaCO3, 300 grams, needed to be utilized in order to provide the same amount of carbonate as MgCO3. Calcium carbonate is also significantly less soluble than the other carbonates. For this reason 100 grams of K2CO3 was also added to help raise alkalinity, pH and K+ levels.

Nitrite levels have been consistently higher than previously seen in our basic system even with optimal pH and temperature levels. The reason behind this is the large population of 95 fish being utilized in the system.  Another reason is that the clarifier was getting clogged by large clumps of nitrifying bacteria which was growing too quickly for the system to handle. This was lowering the flow rate and keeping the media bed from siphoning regularly. Without regular siphoning the bacteria may not be receiving enough oxygen to preform adequate nitrification. A larger bristle brush pipe cleaner is the best tool you can use to keep the pipes connecting the fish tank, clarifier and media bed clean. This can be purchased at any major hardware store.

On 6/11, over a weekend, the system clogged due to a screen placed over the clarifier outlet for our Shrimp experiment which clogged with nitrifying bacteria faster than anticipated. More surprising was how fast the fish in the system died after the system became clogged. The bypass valve was opened slightly so the system never overfilled but the flow slowed enough to cause ammonia levels to become lethal. Half the fish died and now only 41-42 remain. If the system stops flowing with a large population of fish it takes <24 hours to cause significant damage. This is discussed in more depth in our experiments post next week.

This also means the nitrification rate is now significantly slower and the pH is no longer as affected leading to higher pH levels. The alkalinity managed to rise to 150 mg/L due to the transpiration of the lettuce and collards in both float beds. This transpiration is very significant (>5 gallons required per day). Overall, the leafy crops appear to have a very strong basifying effect on the system.

The blue tilapia in system #2 continue to feed at more than the optimal rate even after the clog on 6/11. The fish that survived have recovered fully. They are feeding at a rate far higher than expected at 170 grams/day and each weighs an average of ¼ lbs or 114 grams. Using the avg. tilapia weight they should be feeding at 130 grams/day which means they are consuming 40 grams more feed than expected with a feeding at 3.55% body weight per day rate. This means that the tilapia purchased from the commercial fish farm in NM can consume the anticipated maximum for tilapia of 200 g.

It is safe to say that 100 fish, for even the largest Aqueduct layout (both add-ons included), is over-kill. The accumulation of nutrients was already becoming an issue after just over two months since adding the tilapia. This is proven consistent with our recommendation that 75 Tilapia is the upper limit of the system. The data also indicates that a system can function with as few as 25 individuals. We will be exploring a low density system after our next reset.

The lettuce and collard varieties in both float beds have shown absolutely no problem growing. Any leafy green or lettuce related variety thrive in the Aqueduct environment.

The newly planted Asian greens, under the LEDs, are showing very interesting pigmentation which should produce a very appealing variety visually. 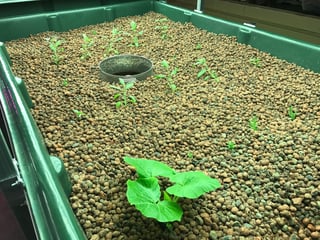 As discussed below the first image at the top of this post the LED grown lettuce and collards are growing slightly larger than all of the same individuals under the fluorescent fixture. This is because the LEDs produce a higher PAR at near 350 umols/m2/s vs the fluorescents which output 280 umols/m2/s. The mixed lettuce in the LED grow bed needed approximately 24 days to reach max maturity (first signs of bolting) after being transplanted whereas the fluorescent grown lettuce needed approximately 30 days. The LEDs consume 40% less energy while taking 20% less time to produce similar mass quantities. Below is an image taken on 6/12 showing the difference in size of crops between the two testing float beds: 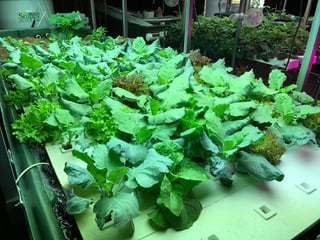 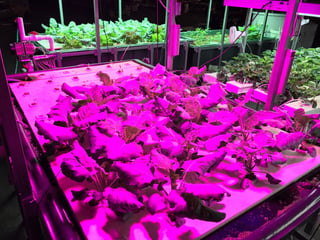 The collards in the LED grow bed have gotten so large that they were partially covering the mixed lettuce before it was harvested. Now they cover the area almost completely