Below are the results from the 8/10 water quality test which was sampled just before re-setting the system so these can be considered final results. There are some major differences since the previous test on 6/20. The largest is the decrease in both Nitrate and Potassium. The decrease in potassium is due to lack of addition of K2CO3 over the last couple of months as pH remained high.  This is due to the production of higher feeding crops. The decrease in nitrate concentration is also due to the increased feeding rate of heavier feeding crops like tomatoes, cucumbers, peppers and melons all added around 6/20. Nitrate concentration was highest on 6/20. This was due to the switching of light feeding fruiting crops like beans and peas to heavier feeding fruiting crops allowing nitrate accumulation to occur.

Sodium and sulfur levels are continuing to rise substantially. Our conclusion is that the compound are not reaching a plateau. It is these compounds that have maintained EC while nitrate and K levels have dropped over time.

Other nutrient levels are appropriate, particularly the micronutrients. Only Mn continues to maintain very low concentrations but it has remained high enough to keep any deficiencies from occurring thanks to the Micro-mix and MnSO4.

Overall despite lower nitrate and K the growth rate and quality of the crops within the system seemed unperturbed. The Asian eggplant in particular was producing many fruit at an aggressive rate and no crops developed any significant deficiencies other than micro (Fe, Mn) based.

Below is a chart showing the appropriate size of tilapia over time. The tilapia from the previous growth period had trouble maintaining appropriate size during their early growth stages due to their lower quality. By week 6 the fish were still <30 g/fish (shown in red)

After reaching close to 50 grams/fish the growth rate increased. So overall it took approximately 16 weeks instead of the recommended 14 weeks to grow the fish out from 10 to 125 grams (shown in orange).

After this point the fish had no problem maintaining the appropriate growth rate and reached the correct size by week 20 (shown in green).

Below shows the change in size of the fingerlings over the past several weeks. The greatest change is in the fry’s color which has begun to darken as they slowly mature.

The fingerlings were weighed on 8/31 and average just under 4 grams each. This makes the feeding rate 11.6 grams/day at 4% body weight but was quickly increased to 14.5 g/day as the frys continued feeding.

Crops were added almost immediately to the system on 8/29 as nitrate accumulation has already begun just days after system re-set. Mixed lettuce and Asian leafy greens have been added thus far in a staggered fashion. More crops will be added to the system in the near future including light feeding fruiting crops to the media bed. Below is an image of the seedlings so far. 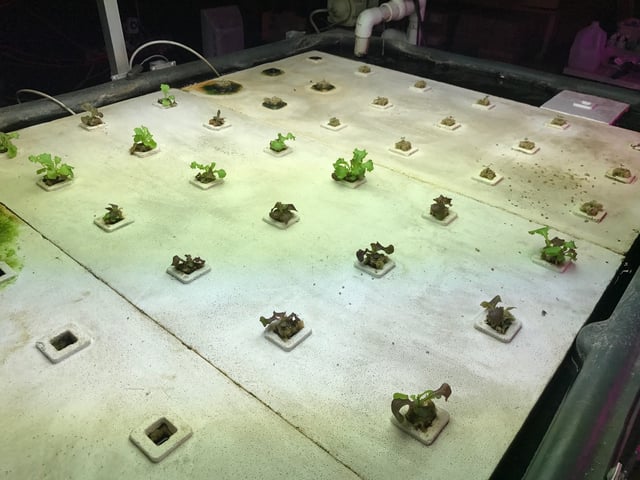