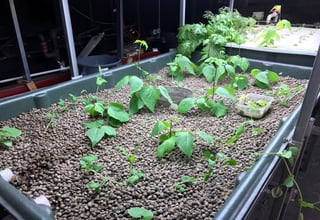 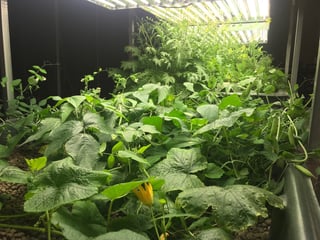 Above the top image is of system on 11/1 and the bottom image is the system on 12/06, filled with beans and peas in the media bed and mustards and romaine in the float bed both of which have been harvested toughly. Bean and peas both grow extremely well in aquaponics conditions and require relatively little supplementation.

Water Quality: It has been 3.5 months since the system was reset and nutrient content is now sufficient for heavy fruiting crop production such as tomatoes, cucumbers and peppers. The lower air temperature (b/t 60-70 F) and the consistent water temperature provided by the inline heater have greatly improved overall water quality condition and chemistry. pH fluctuations are far more common allowing far greater additions of the carbonate compound K2CO3 which enables more effective fruit production. Between 100-125 grams of K2CO3 can be added at a time and maintains pH for about a week. STP(100g), Micro Mix(10g), Chelated Iron(50g) and MnSO4(25g) have been added over the past month as well to speed up the production process.  A water sample was sent in to JR labs on 12/11 which was taken on 12/8. The potassium and phosphate levels are expected to increase greatly because of the higher additions of K2CO3 and STP. This will maintain better fruit production throughout the system life cycle and will even allow feeding rates to be lowered creating a more ideal N:P:K ratio for all crops.

The effects on pH appear to be influenced by crop nutrient uptake which is stimulated mainly by the air temperature surrounding the crops. Temperatures between 60-70 F cause the ratio of cations up taken by the root to increase thus resulting the output of more positively charged particles creating the acidic environment we need to add potassium bases carbonate compounds. This illustrates, from an experimental perspective, how significant and vital it is to maintain ideal crop parameters when utilizing aquaponic or hydroponic growing procedures. The higher temperatures observed during the summer months caused pH to remain higher lowering carbonate addition. Clogging was also more likely to occur for reasons currently not well understood.

Fish Update: The high grade tilapias have grown substantially over the past month and were weighed on 12/06 to determine an average weight of 80 grams/fish, an increase of 45 grams per fish since the last weighing on 11/08. This brings the feeding rate up to 170 grams/day at a 3% body weight fed. According to our fish growing schedule we are about 10 weeks into the grow cycle and the tilapia are exactly where they should be in terms of size and a little further along in feeding rate which should be at 160 g/day. These tilapias have had no problem keeping up with growing requirements even when water temperature dropped well below the optimal for several days.

The 2.5 mm feed continues to be used and will be switched once the fish are 14 weeks old.

Crop Update: The system is full of crops now with the float bed supporting various mustard greens and romaine lettuce and the media bed utilizing lighter feeding fruiting crops including beans and peas which are fully mature and have produced several pounds of fruit. Squash have also been placed in the media bed to determine if the nutrient concentration is sufficient enough to support heavier feeding crops at the front of the system. Thus far the vegetative production is perfect but the PAR is not high enough to support fruit development. Crops were allowed to grow to substantial size to show off the growing power of the system and can be seen in our images.

The romaine and mustards in the float bed were all harvested on 12/06 and will be replaced in a staggered manner by iceberg lettuce and green and red cabbage varieties in the month to come. 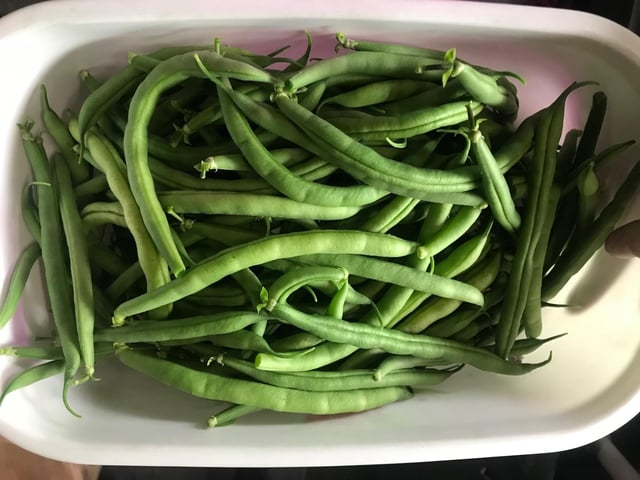