Introduction: A primary advantage of aquaponics is the ability to utilize natural organisms and processes that enable the conversion of ammonia based waste into dissolved nutrients for the crops.  The system is a miniature ecosystem that combines natural phenomenon to enable continuous recycling of the solution which in turn greatly reduces the wasting of resources, such as water or nutrients, while maintaining very high food safety standards.

In order to improve the efficiency of the Aqueduct we are conducting a new experiment using multiple types of benefical organisms that should protect crops from pests and improve the conversion from solids to dissolved solids. These organisms include red worms, shrimp and carnivorous crops.

Red Worm (Red Wigglers): Red worms are known to improve the decomposition of fish waste in media/substrate based grow beds. They have even been used as a complete substitute for fish in small scale aquaponics operations. If you choose only one beneficial to add to your system this our recommendation. They love to eat waste and will even gobble up pests that try to hide out at the bottom of the crops. We expect the red worms to help break down the solid waste that collects in the media bed over time. This will allow more nutrients to become available to the crops as well as lower overall accumulation.

The media bed is submerged in water half of the time, but drowning should not be an issue for the red worms. They are known to be able to survive for weeks continuously submerged under oxygenated water so we are do not expect this to be an issue.

50 red worms each were added to the systems for a total of 100. They were purchases at a local pet store for 10$. 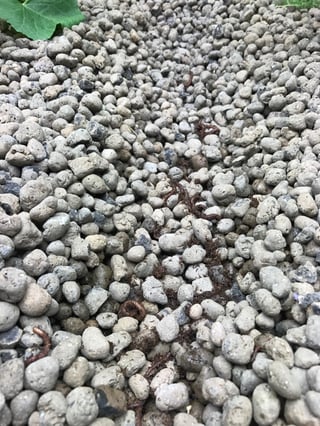 Above is an image of the red worms being placed in a media bed. A long trench was dug in the media bed and the 50 worms were placed evenly throughout. The worms quickly buried themselves in the media.

Shrimp: Shrimp have been used in aquaponics before but have proven to be an inefficient method of growing crops over fish by themselves. For this reason, we decided to use our clarifier on the Niles system as a holding tank for 2 oz. of shrimp (about 25).  We decided to that because Niles has more fish (96 vs 65) that are higher quality the shrimp would do best in it's clarifier. The higher quality fish are producing waste that settles in the clarifier far better than that of the Frasier system providing more feed for the shrimp. Niles' clarifier is also showing far better bacteria growth throughout the tank which signifies the quality of the waste is better. This growth will act as the feed for the shrimp as well as algae and undissolved waste particles.

The shrimp appear to be performing very well with only two dead out of the total, one very small individual died because it got stuck on the outlet. After a few days the shrimp have already grown and can be observed feeding along the sides of the tank and output assemblies regularly. Below is an image of a few individuals. They are clear currently and have been circled in red to help them stand out. 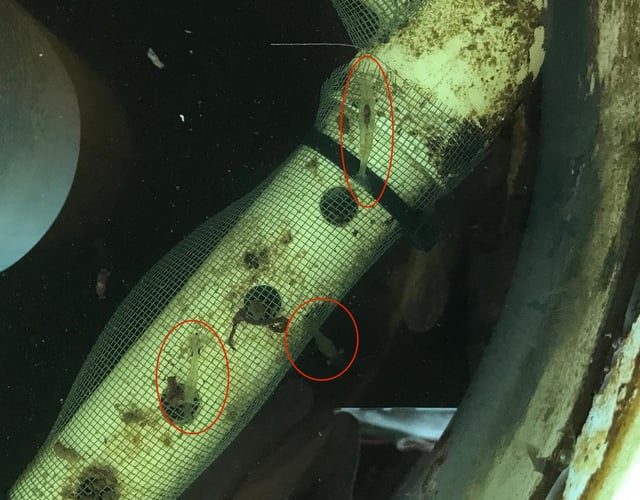 The greatest challenge will be keeping the shrimp from being sucked out of the clarifier when it is being drained. A DIY screen was added to the bottom and outlet of the clarifier to help prevent this. The shrimp were only 1-2” long when added and they can fit through small very cracks along the edge of the screen at the bottom. For this reason, a small cage will be constructed out of flexible screen to hold the shrimp until they reach a size > ¼” in diameter. The waste will build up on the cage outside providing the shrimp with adequate food until they are large enough. After a few days it became evident that waste build-up is simply too great on outlet screens (image above) for shrimp release at sizes <1/4”.

Carnivorous Crops: These crops serve two purposes in our experiments. First, we can determine how effective they are at removing flies, spiders, and other insects from the surroundings. Second, we can see how well specialty crops like these grow in an aquaponic environment.

So far the crops are tolerating the conditions very well, which  was expected. It was noted that the moist carnivorous crops were beginning to dry out very quickly when placed at the edges of the system close to the fans after only a day. These crops were moved to areas of the system with less air movement.

These types of crops prefer dark and very wet areas so be sure to transplant them near the front of the media bed where the water input is located or in the float bed where the roots are in constant contact with the water. Below are images of the various types of carnivorous crops placed throughout the Frasier system. 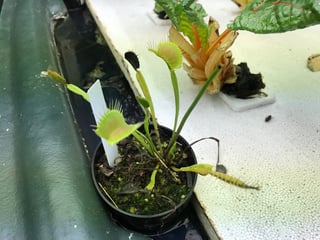