In some of our previous posts you may have noticed that we are building a second Aqueductsystem in our warehouse. This new system features a Float Bed Expansion rather than the NFT bench on our older system.  To help our readers identify which system we are talking about, we have decided to call this new system “Niles.” 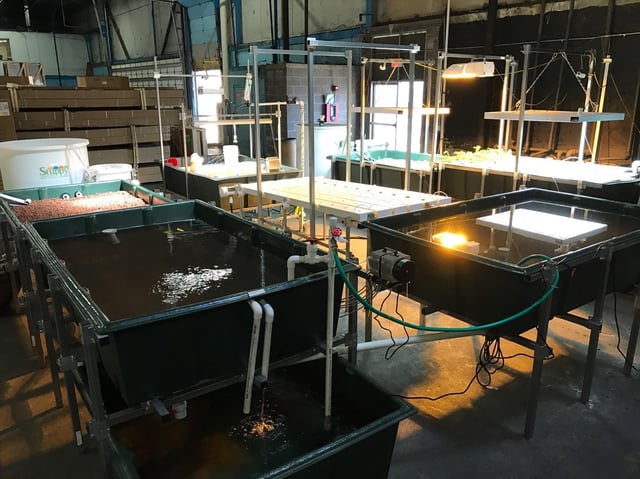 On April 12th, at 4pm, we added 100 Tilapias to the Niles system. These new fish weighed an average of 16.5 grams each and were sourced from Americulture. Americulture is a high quality fish farm in New Mexico that we have worked with before, and our expectation is that these fish will have less difficulty than the Blue Tilapia on Aqueduct #1(nickname pending).

We will be using this system first to test our first LED lighting fixture(s) that we hope to release later in 2017. The LED lights are expected to cut power consumption by approximately 50% while simultaneously improving crop quality and yield over our Fluorescent and HID options.

Water Quality Overview: After 5 days the water quality parameters are proceeding as expected with ammonia levels beginning to rise slowly. The ammonia concentrations have not reached levels to begin adequate colonizing of nitrifying bacteria quite yet but should begin before concentration go above 8 mg/L ammonia.

The alkalinity is higher than that of the source water which is closer to 60 mg/L and this is due to the dust left over on the expanded clay media. Despite heavily rinsing the media bed it is not unexpected to accumulate a thin layer of reddish dust on the bottoms of the tanks. This will not harm the fish, crops or system in any way and in fact may add some extra trace metals essential for crop growth.

Fish Overview: These tilapias are expected to be of far better quality than the tilapia in Aqueduct #1(nickname pending) because they come straight from one of the most reliable sources in the United States. The tilapia in Aqueduct #1, on the other hand, were obtained from another source that utilizes less stringent techniques.  Ninety-Seven of our new fish survived the trip from sunny New mexico, check them out below. 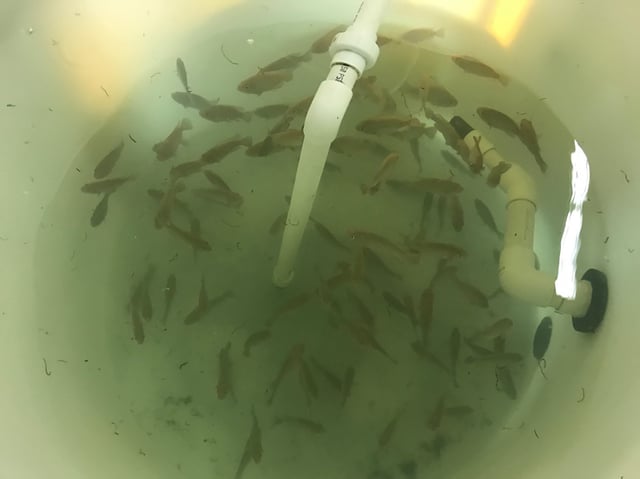 These tilapia were started at the most widely available average weight between 10-50 grams which turned out to be an average of 16.5 grams each. Thus far they have been consuming feed at a rate slightly greater than that of maximum of 4%.

Crop Overview: Since we are starting the system with the max number of tilapia and at a larger size than originally intended (16.5 g vs 10 g) we will be starting the float bed immediately with mixed lettuce varieties instead of arugula, which has already been seeded. Lavender and rosemary have also been seeded for the media bed immediately since they will take a while to grow large enough to consume larger amounts of nutrients.