How is the aquaponics system performing since the restart?

Water Quality Overview: Nitrate levels are finally beginning to rise more significantly however this process is still expected to be slow as fish are now not eating as much (<4%). This will continue to be the case until the feeding rate can be significantly increased. The pH is relatively high still but the arugula is not showing any significant signs of deficiencies. It is surprising that the pH has remaining constant over such a long period of time, I would have expected it to drop by now. For this reason, I decided to test the pH of each tank to see if a pattern could be deduced, below are the results:

So it can be clearly seen that the media bed does preform significant nitrification because the pH drops from 7.7, in the float bed, to 7.5 in the media bed but why does the pH increase back to 7.7 when it reaches the float bed again? The most likely reason behind this is that the arugula is releasing hydroxide (OH-) ions into the solution as nitrate is up-taken. Crops need to maintain a constant balanced ionic charge within the roots so when more negatively charged nitrate ions are taken into the crop it balances the charge in its roots by releasing hydroxide ions.

Fish Update: The fish appear to be very healthy and are continuing to grow well increasing from 10.35 g to 13.68 grams this last week. However, that being said the fish food consumption has decreased rapidly in the last week for an unknown reason. For a little bit of time they were being overfed due to a weighing error but that was corrected several weeks ago. In order to start troubleshooting the issue I have reduced the feeding rate to less than 2% of fish body weight (should be at 4%). This will be maintained over the weekend and I will check back again Monday (2/13). Hopefully the lack of food will get them hungry and they will start eating again. 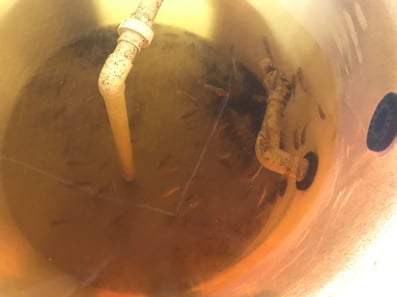 Crop Update: Since the nitrate levels are beginning to rise more significantly it’s time to move to the next crop in the curriculum which is watercress. Watercress required slightly more nutrients than arugula but is not quite as aggressive as lettuce varieties. Chives is another annual that could be seeded at this time for the float bed. Water cress and chive seedlings would typically replace the arugula in the float bed but since we have a prototype NFT attached to the system I will be adding the watercress/chives to that while maintaining arugula in the float bed. 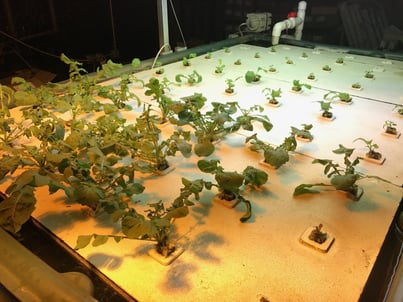