NITRITE CONCENTRATION INCREASE: (11/16) Nitrite concentration has climbed from 0.25 to 0.5 mg/L while ammonia concentration have remained low (<0.25 mg/L). This is still within safe levels for nitrite (want <l mg/L) but I want to discuss the reasons why this is occurring. There are a couple reasons why the nitrite concentration might be increasing. The first and most likely reason is that the media bed has become clogged with waste debris after a year of running continuously. Around 40% of the space appears to be clogged. The old system only drains about 3” into the sump whereas the new trade show system, set up a little over a week ago, drains 5.5” into the sump. The second is that the numbers of nitrite transforming microorganisms are limited in the system. It may be necessary to inoculate with bacteria specific for nitrite conversion, this include the bacteria groups Nitrobacter, Nitrospina, Nitrococcus. Optimally the pH should be between 7.3-7.9 but these bacteria should survive in condition between 5.8-8.5.

Since the Ph of our system is between 6.6-7.0 it is well within the safe range for survivability of the bacteria but is not optimal for nitrification so raising the pH could help this process when aggressive growth demands more feed to be added over time.

(11/18) Nitrite concentrations have been stable at around 0.5 mg/L over the past week. As long as the concentration remains below 1.0 mg/L there is nothing to worry about.

(11/22) Nitrite concentrations have been stable at around 0.5 mg/L over last week but now that value is >1.0 mg/L even with the pH near 7.0. This is most likely due to the decrease in water temperature which decreases the nitrification rate (ideal temps for nitrification 77-86 F). If this is the case then it’s likely that a water temperature of at least 70 F should be maintained to keep nitrification sufficient. However, until the system is cleaned and the media bed turned over the main cause behind the nitrite increase is relatively unknown. It is just as likely the problem is the over accumulation of waste in the media bed. It is even more likely that both are playing a role. 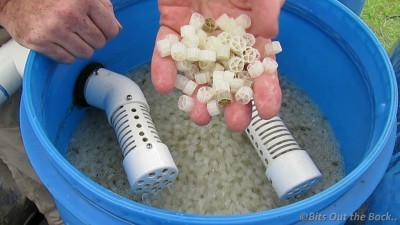