Cleaning and Restarting an Aquaponics System

OVERVIEW: The research system was shut down to begin an improvised cleaning process that should remove any pathogens; viral, bacteria, ect. from every component of the system.

Deep cleaning an aquaponic based system is one of the most important procedures required to run the system effectively and efficiently over long periods of time and should be accomplished at least once per year!

In recycling systems, particularly aquaponics based systems, the buildup of organic waste and matter over time leads to the eventual inoculation and spread of a variety of potentially threatening microorganisms that can thrive within the nutrient solution. The environmental parameters of the system, which are set to produce optimal growth of fish, plants and nitrifying bacteria (for nutrient conversion), are generally also the optimal parameters required for the growth and high spread of many destructive diseases and pathogens. So in the end system contamination is an inevitable consequence of recycling systems.

The only way to fight contamination of the system is with a regular cleaning regiment and IPM (integrated pest management). Pests are the major source of disease so catching and removing these pests and crops affected by disease as fast as possible is key to keep contaminates like viruses, bacteria and fungus out of the system.

IPM (INTEGRATED PEST MANAGEMENT): I cannot stress enough the importance of IPM for the continued management of the health and quality of the crops and fish in an aquaponics system. This is because in most cases pests are the source of the system and/or plant contamination.

Pests including: thrips, aphids, white flies, fungus gnats, spider mites and leaf miners are among the most common disease transmitters. The first three are particularly threatening and can carry a multitude of viral diseases that can ultimately decimate an entire crop variety.

EXAMPLE: We saw an example of this first hand when I first began in August; a thrip infestation had taken over and was destroying the basil crops. At first I believed the basils distorted leaves and retarded growth was due to the high amount of direct thrip damage done to the crops leaves. Over time they appeared to get somewhat better but never improved by much. When a new set of basil crops was sown they started out with normal growth but after a month or so began to develop the same physiological system as before and I concluded a viral disease was present because this time IPM was being used. By the time the crops were fully grown they were exhibiting very aggressive symptoms of the infection and had to be removed. This deep clean should remove the contamination. Below is an image of an individual basil affected by the disease. 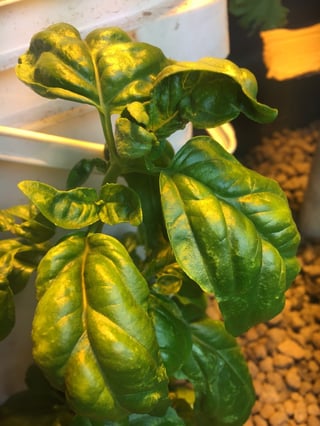 The first pesticide I have is a spinosad based spray, which is considered the strongest out of the three and is useful when infestations become more serious; damage and or pest is visible on at least 20% of crops. It is a natural product made by bacteria and has a very low toxicity profile in mammals.

The second pesticide/fungicide I use is a sesame seed oil based pesticide spray and it is affective against most pests as well as fungus. For this reason, it is particularly useful. It also has zero toxicity and is even safe for use with beneficials like bees. Although this single pesticide appears to be more than enough the use of only one pesticide will not remove all pests in the long run. This is because overtime pests become resistant to a specific pesticide. This is why more than 1 is required for effective IPM.

There are many other organic pesticides, find out more here: http://npic.orst.edu/ingred/organic.html

DEEP CLEANING: The deep clean involves completely emptying the system of fish and crops and nutrient solution, removing the excess waste built-up in the media bed and decontaminating the whole system by running a disinfectant through it. 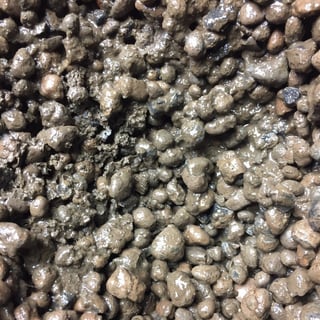 Above is an image of the waste build up in the media below the inlet after 1 yr.

PROCEDURE: Once the fish and crops have been harvested for the final time use the remaining nutrient solution to remove as much excess sludge from the media bed as possible.

First I recommend removing the first 1.5 feet of media (about 3-4 original bags worth) around the fish to media bed inlet because this is where the vast majority of the waste accumulates. Add that media to a separate small tank or on top of a tarp and rinse off as best as possible.

The remaining media in the system can then be cleaned by overfilling the media bed by several inches (close the media to sump valve to do this) then use a long stick or other tool to mix the media around and break up the waste. We discovered the waste breaks away from the expanded clay very easily. Then while stirring open the valve system. (Close the valve connecting the sump to the float bed, SEE SKETCH BELOW)

Other disinfectants include: Hydrogen peroxide and UV treatment. UV treatment in particular can disinfect the system constantly over time and may be something we consider an option for our system in the near future.Above is an image of the media bed undergoing cleaning. The water level is elevated to allow easy mixing and separation of waste from clay pebbles.

Now it’s time to disinfect. Fill the system with source water and run it as you would at start-up but take the top of the siphon off to keep the water level in the media bed high constantly. Then add the desired disinfectant to the water. Liquid based pool chlorine is the cheapest and is very effective. Stir up media once per day. After about one week the system can be drained and rinsed and restarted! Before draining do one final media cleaning as stated above. Let the system sit and dry out for a few days (use air stones for media to dry quicker), rinse with clean water, then refill and re-start. SEE START UP GUIDE