Water Quality: I have run into an interesting new issue with the system. A little early this week I noticed that the basil is showing significant signs of a deficiency. It appears to be a magnesium deficiency but this seems unlikely as my most recent test results indicate there is 80-100 mg/L in solution, it is possible that the total hardness strip test I have been using are not accurate enough for the type of tests I have been administering or it could be an availability issue.

MAGNESIUM PROBLEM: The basil in the system is indicating that there is a deficiency and it appears to be Mg but my tests have show more than sufficient concentrations should be available. Plus the source water also has high levels of Mg already dissolved. For these reasons I have ordered a better total hardness test that will give far more accurate results. I feel like my strip test estimates have been a little too high so I may be overestimating Mg concentration.

It possible that the deficiency is caused by lack of potassium which would make a little more sense because larger concentration are required and source water does not contain more than 10 mg/L. However previous tests have shown potassium concentrations have been as high as 270 mg/L in the system. Levels may be too low now that the system has been drained and the feeding rate lowered.

If this does not appear to be the case then it is possible that Mg is being made unavailable somehow. The main cause for this would be nutrient competition but this is also unlikely because Ca is the only heavily added nutrient (because of CaCO3 additions) and concentration have remained around 190 mg/L which is a normal level.

Finally, the feeding rate being lower than normal for the planting area is the most likely reason behind any deficiency. Although the float raft only has seedlings currently and the NFT is not running, the media bed is full and competition for nutrients may be too great within that area. I believe this is the most plausible reasoning.  I have begun raising the feeding rate (150 g/day to 180 g/day) and will likely increase it more Monday depending on the observation made at that time. Based on the proper feeding ratio of between 50-100 g/m2/day the feed should be at least 270 grams/m2/day but that seemed to be too much for the system when I began a few months ago as the EC was climbing too fast.

If all of the above does not work then I can add magnesium sulfate to increase the amount of magnesium and sulfur directly. Magnesium carbonate (MgCO3) also exists and can replace calcium carbonate as a pH adjuster which has better solubility and therefore better alkalinity control however but is considerably more expensive than CaCO3. Also magnesium sulfate is still far more soluble than MgCO3 so it is a better choice for magnesium concentration adjustment in the short run.

Plant Quality: All of the crops besides the basil are growing with no issue. The basil as discussed above has been showing signs of nutrient deficiencies, visually appears to be an Mg deficiency. The pepper and rosemary crops and even the oregano crops, which were doing poorly a couple weeks ago, aren’t showing any signs of such a deficiency. 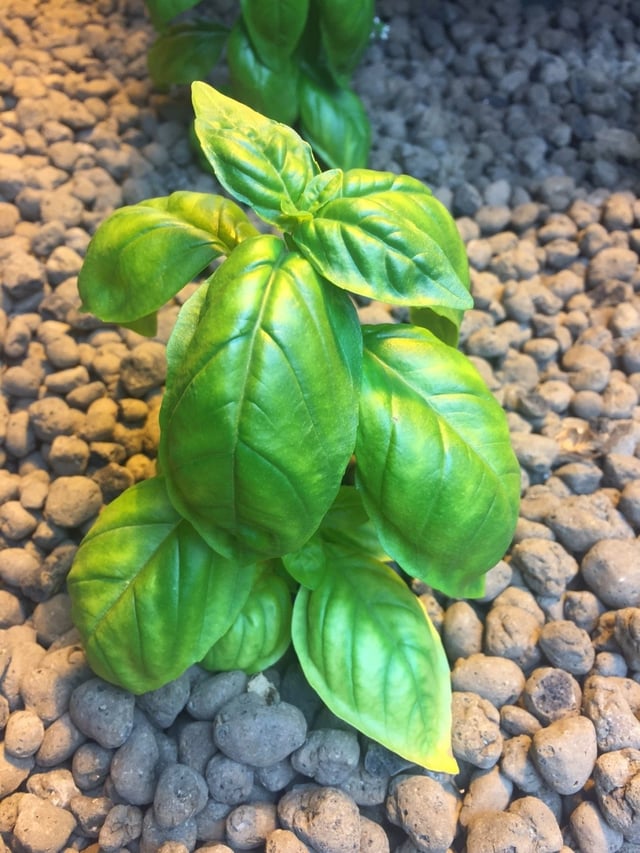 Above is an image of an individual with the deficiency. The lower leaves are showing strong intervienal chlorosis indicative of an Mg deficiency.

Above is an image of the media bed and all the crops to date. The more exotic species are developing well including the artichoke and asparagus varieties. Below are the kale seedlings, growing well. 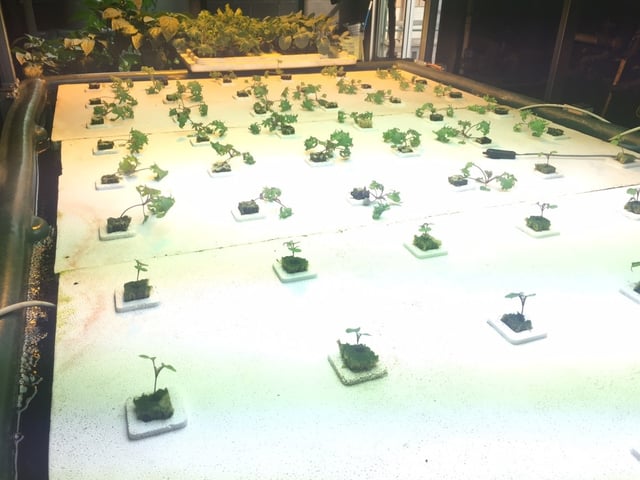 The outdoor seedlings I planted on 10/4 are finally being transplanted outside after 24 days growing indoors. They look fantastic and are growing very well thus far utilizing the water from the system sump. Sludge and excess drain water from the system will be used to provide nutrients and communities of microorganisms to the outdoor grow beds. Below are the transplants in the 20 ft. grow bed.