In Depth Post on Algae and Water Quality in Aquaponics

Water Quality: It has been some time since I have been able to create a post and as such this will include information that was collected from 10/12 – 10/24. A complete water quality test was administered on both 10/12 and 10/24 to determine how hardness and various nutrient concentrations have changed since the last measurements take after draining the system on 9/29. Included below is also a special post about algae; how it can affect your aquaponic system and how best treat it.

The first two issues are particularly important when starting up an aquaponic system as the nutrient content and overall buffer capacity of the solution starts low. As algae consume nutrients in this setting it limits the amount that is available for plant growth. pH also tends to be more sensitive during the early stages of system start-up because higher TDS (total dissolved solids) within aquaponics helps contribute to more stable pHs.  Algae consumes the CO2, a weak acid, in the water while performing photosynthesis which can cause the pH of the solution to increase during the day to toxic levels (>7.5). During the night, when photosynthesis stops the pH drops causing large fluctuation to occur throughout a 24 hr period.

Depleting oxygen is another potential concern when dealing with algae. The decomposing of dead algae in the aquaponic solution is actually the main source of oxygen deprivation so therefore simply cleaning and filtering out dead algae will help maintain oxygen levels. During times of high algae death it is recommended to use extra air stones to help maintain oxygen levels. The worst oxygen depletion occurs during dark hours when photosynthesis isn’t being preformed to create more O2.

Algae are always an inevitable part of growing in deep water culture because of the high moisture, nutrient and light levels. The best way to prevent algae growth is to prevent light from touching the area being affected. Using reflective material, like tin foil or mylar, to cover areas being affected can prevent growth in unwanted areas. Areas that can’t be covered are treated by simply brushing away and filtering out the dead algae with a small fish net. Float rafts and other reusable growing materials should be cleaned thoroughly after every harvest. Cleaning algae in the system is a necessary part of the maintenance of aquaponics and if done weekly requires little effort.

The use of algae eating microorganisms may be possible to lower algae concentrations in the system naturally. Algae can also possibly be used to the advantage of the grower by acting as a buffering agent when the system is stable. Since algae consume CO2 it can help reduce the change in the acidity of the solution over time. As hydrogen protons are released due to the nitrification process they react with the carbonate and bicarbonate in the system, from the CaCO3 additions, to eventually form CO2, Ca and H2O. Algae can remove the CO2 formed maintaining a higher pH for a longer period of time. It is possible that algae can also be used to remove excessive nitrogen from the system when higher ratios of potassium and phosphorous are required for fruiting. These are all theories that will need to be tested in the near future to determine the strength of their validity.

WATER QUALITY RESULTS: Since the draining of the aquaponics system that took place on 9/29/16 the impact of CaCO3 on the buffering capacity of the water has been very substantial. Although the alkalinity never increased above 60 mg/L, even right after draining, the higher pH of the source water and the overall diluted hardness is having a sustained affect on the pH of the solution. This means far less CaCO3 was required to maintain the ideal pH, which for this system has been 6.8. When the standard 350 grams was added the day after draining it raised the pH to 7.2, which was maintained for nearly 2 weeks. Next time the amount of CaCO3 used should be reduced to 25% of its original amount after draining and slowly increased until the desired pH is reached.

Since the affects of CaCO3 lasted longer in the system after draining the total Ca actually decreased between 9/29 and 10/12 before the next addition was added. It dropped from 190 mg/L to about 160 mg/L. The most likely reason this has occurred is because the plants in the system were up taking more Ca than was being added by the CaCO3 addition.

Based on the Ca and total hardness estimates the concentration of Mg has maintained relatively stable over time within the system.

Unfortunately it looks like now the water quality of the system has gone back to were it was before the draining. So overall the draining only improved water conditions for about a month. This time I will wait to drain the system until the pH cannot be raised above 6.5.

Plant Quality: Over the past couple weeks the plants have grown very well within the system. The basil has taken to the media bed well and even the oregano appears to be recovering though the reason behind why oregano had trouble is still not well understood. The pepper plant is producing lots of peppers with over a dozen now forming on the branches.

The basil is showing signs of that strange leaf discoloration and distortion I have seen in the past (see image below); this was originally thought to be caused by thrips but is still present even with them gone. There may be a disease that is attaching the basil in the system; about 50% of the individuals are exhibiting symptoms and are within the same area. 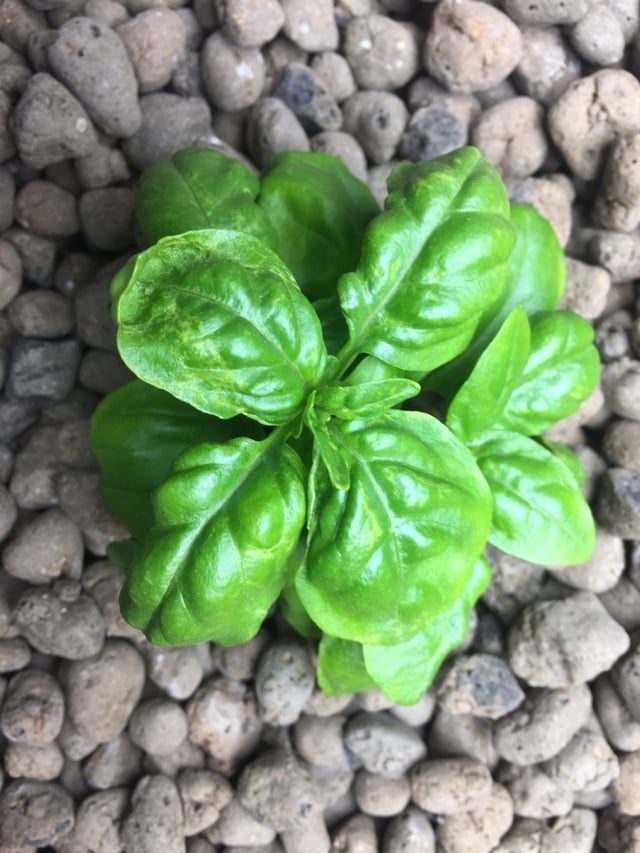 I am beginning a new winter growing regiment with solely kale and bok choy in the aquaponics float bed and NFT components of the system (below is an image of the kale seedlings).  I am doing this because both crops have a very similar grow period and I want to perform an effective staggered production pattern. 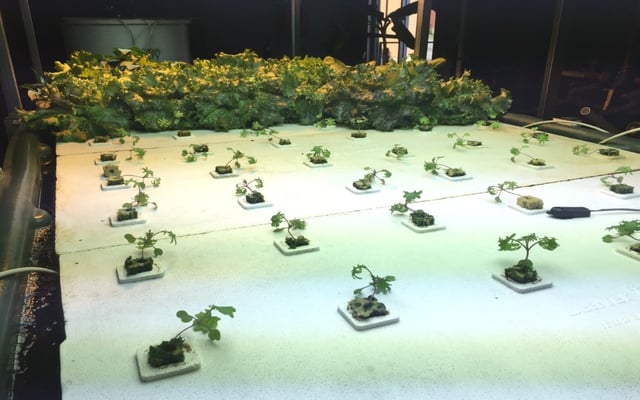 The new seedlings planted for the outside grow beds are looking very good, better than I could have hoped and are growing very well using the system sump water. Varieties like spinach are performing much better than they were in the NFT component most likely because of the cooler climate but the quality of light and possible disease may also be a potential candidate for being the source of the problem. It is still quite hot during the day outside but I have no choice but to transplant soon because the individuals are getting large. Below are iceberg lettuce, kale, spinach, cabbage and broccoli 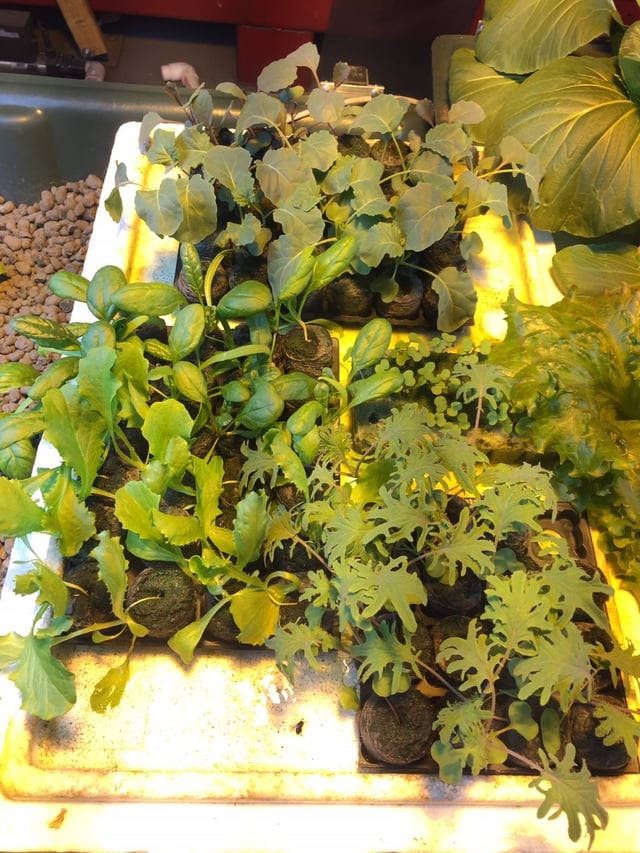 I have decided to use the media bed to grow more fruiting and exotic crops as we enter the beginning of the winter season. Since the flowers are no longer aborting due to excessive heat it is a good opportunity to experiment with them. I have also decided to experiment with crops that have long growing periods like artichokes and asparagus to see how they perform when grown aquaponically. 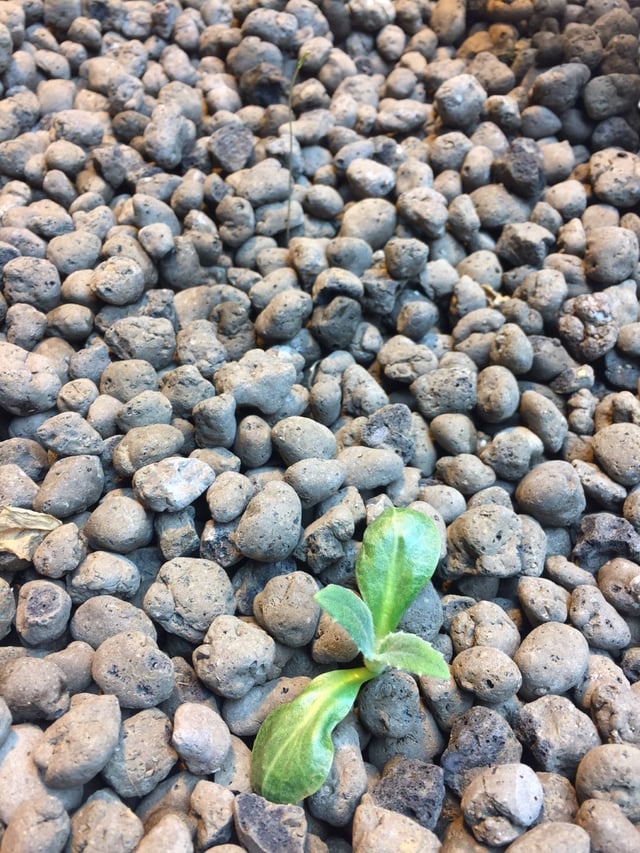 Above is an image of an artichoke and asparagus seedling (the asparagus is very thin and difficult to see).