Water Quality: Maintaining very well. pH is still maintaining but closer to 6.5-6.4 now and alkalinity has still not dropped much. A 350 gram addition of CaCO3 will be made today and a calcium and alkalinity test will be completed to get a better understanding of how much of the added CaCO3 is dissolving. The 700 gram addition lasted 10 days, longer than anticipated.

CaCO3 ADDITION AND ITS EFFECTS ON Ca CONCENTRATION AND ALKALINITY: Since the pH is getting fairly close to going <6.5 I have decided to add more CaCO3 before the weekend. I will be testing the calcium content of the water before and after the 350 gram addition to determine how much of the Ca from the CaCO3 is dissolving into solution. Knowing the concentrations of Ca also enables me to keep better track of the ionic balance within the system and keep concentrations of Ca from getting to high.

The current concentration is 190 mg/L which means it has dropped about 30 mg/L in the last 3 days so Ca is being utilized by the plants very effectively at an average of 10 mg/L/day. I am hoping to be able to use a rate like this in the near future to estimate when to add more CaCO3 without creating and excess of Ca and still be able to maintain alkalinity. It appears that the system has enough plants currently to start decreasing Ca faster than the alkalinity. This is good because in the past this was not the case as the concentration of Ca are much greater than CO3 overall.

After adding the CaCO3 the pH increased to 6.7-6.8 as expected and the alkalinity increased from 22.5 -> 45 mg/L (CaCO3 equ). Any change in Ca concentration however is unreadable by the test kit I have as the increase seems to be too small. However based on the alkalinity test the Ca concentration only rose by about 8 mg/L. This proves, as expected, that the CaCO3 is not dissolving much immediately when being put into the system but instead dissolves into the solution slowly as nitrification proceeds over time. Ca concentrations will be tracked closely from this point on to observe how concentrations change over time.

Plant Quality: The butter head lettuce is ready to harvest. It is bitter but that is due to the heat of the warehouse which is out of my control. The calcium deficiency may be further exacerbated by the heat as the air movement around the lettuce should be adequate by now but the deficiency is still developing. Other than that the rate of growth and overall appearance is very good. If air conditions were optimal I’m sure the lettuce would be even better. Overall butter head should be saved for the cooler seasons. 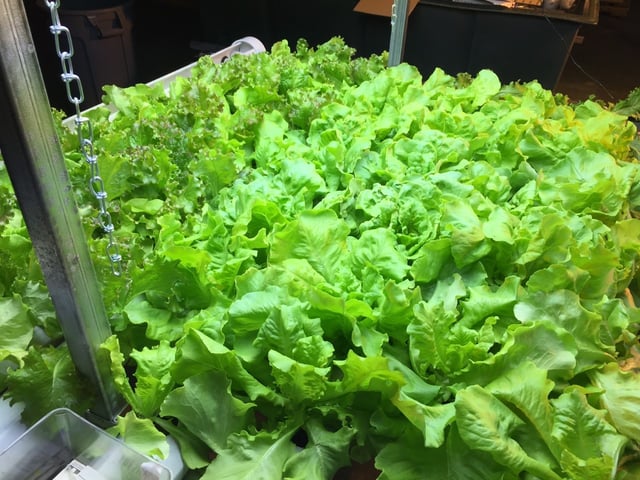 New Lights: We have set up the first of two large 650W florescent lights that will be replacing the weaker MH lights in the float bed and the media bed. The first light has been placed over the float bed and provides the crops that grow within it with up to 230 umol/m2/sec of PAR light.

COMPLETE SETUP AND PAR LEVELS: The complete lighting setup will now be composed of two 650W fluorescents, which will cover the ends of the system and one 1000W HPS to cover the center (PAR begins to drop off in the center because the fluorescent lights are each only 4 ft. long where as the entire growing area covers around 15 ft) and to provide some warm light. The system now has a PAR range from 150-230 umol/m2/sec with the highest range found in the center of the float raft and media bed and the lowest found where the float raft and media bed meet beneath the HPS. This will grow crops far more effectively than before. 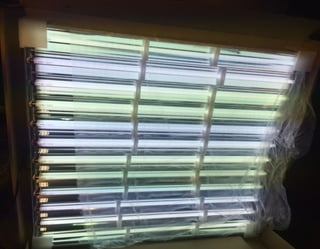 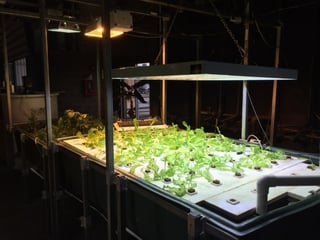 In the image on the right the float raft is glowing under the new light which produces roughly 5x more light than the MH in the media bed which will also be replaced by a fluorescent in the next couple days too.

New Irrigation Design w/ Heater: I have completed designing an irrigation setup that connects with a water heater to allow customers to have the option to control water temperature in colder environmental conditions. I will now be cementing the assembly together to test run it. This assembly was design to be easy to assemble with only one person. 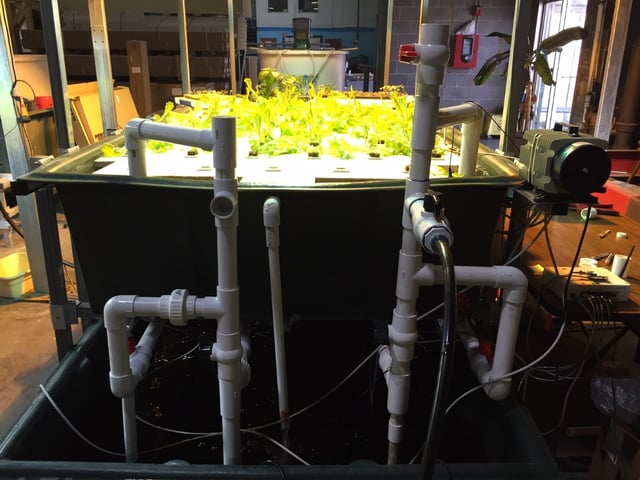 The irrigation set up on the left is the new design (not fully completed in the image) and the one on the right is the old design. The new design is simply optimized to include as few parts as possible and to make the assemble quick and easy.