This week I tested the electrical parameters of the components that make up the warehouse system using an electric meter. Starting with the two system pumps I found that the voltage was 110V and the amps used by the water pump and air pump were 0.347 and 1.54 amps for a total of 210 Watts of power used. Run 24 hrs per day means 5.04 kWh are required to move water and aerate the system everyday which costs about $0.60 per day or $220 per year total.

The air pump was found to be fairly inefficient as it used 170W versus the 112W it’s rated at so a new, more efficient, option will likely be substituted in the near future.

The florescent fixtures were also tested and found to be highly efficiency using only 5.20 amps. With a voltage of 110V that means the light uses about 575W which is substantially less than the 650W it’s rated at. If used 18 hours a day for lettuce production then 10.35 kWh are needed per day which costs about $1.25 per day or $455 per year.

Below is an example calculation used to get the values above: 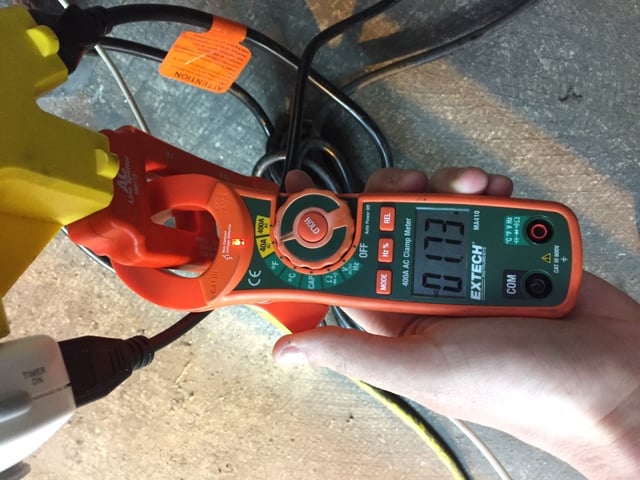 Above is an image of the test being performed with a specialized metering tool.