Do I Need to Test Phosphates in Aquaponics?

OVERVIEW: In the past the best phosphate test used could only measure between 0-10 mg/L (PO4) which is not nearly sufficient enough for plant production. A new phosphate test has been received from Sigma-Aldrich, a laboratory supply and testing company, which can determine phosphate levels between 0-100 mg/L. 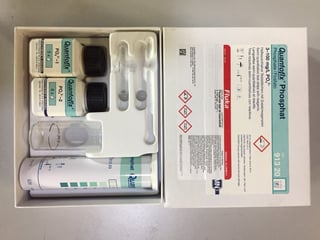 RESULTS: The test showed that there is about 35 mg/L phosphate in the highly concentrated nutrient solution collected from the system around peak production.  This is equivalent to about 12 mg/L phosphorous (P). This is a little low compared to most hydroponic solution concentrations which are generally around 30-40 mg/L however lower phosphorous concentration down to 16 mg/L have shown to grow leafy greens and even fruiting crops fairly effectively in hydroponics. And since aquaponics continuously releases nutrients used phosphorous is replaced quickly allowing for lower concentration.

CONCLUSION: Phosphorous deficiencies are generally not seem in aquaponic when growing lettuce and leafy green so 12 mg/L should be sufficient but it is unclear if this concentration is enough for fruiting crops like tomatoes and other more exotic species.

If a phosphorous deficiency occurred it would be likely because of excessive calcium addition which reacts with phosphate at higher concentration and precipitates out of solution. This is still unlikely as concentration would need to be far higher than typical concentration of 200 mg/L.