A variety of new experiments are now taking shape with the implementation of LED lighting and hydroponic growing systems. Comparisons between the different conditions are being conducted to determine the best grow method for fruiting crops within aquaponics and hydroponics systems, illuminated by either LED or fluorescent fixture.

The crops being compared in this experiment are tomatoes, cucumbers and a variety of peppers (jalapeno, bell pepper and habanero)

Tomatoes grown under the LED lights have shown significantly higher fruit production than those under the fluorescent lights. One crop in particular is producing massive fruit at a scale unmatched throughout the system. An image of the crop and the fruit is below: 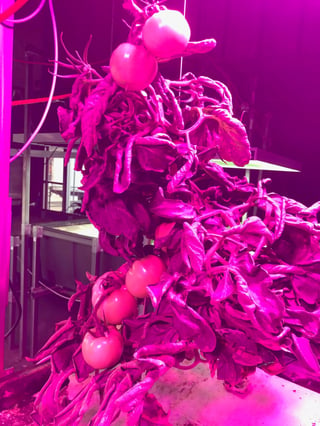 The leaf curled caused by the use of the tomatoes in the float bed has stunted the cherry tomatoes. The heirloom variety has grown significantly larger within the float bed but has also reached it limits.

A new tomato trial will soon be conducted within the media bed underneath purely LED lighting to determine which varieties produce best under our optimal system conditions. 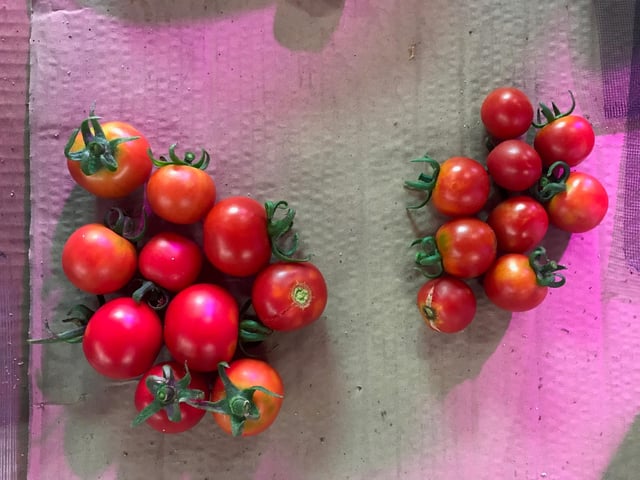 After several harvests now it can be concluded that the LED lighting produced larger individual cucumbers.

Tomatoes: Fruit formation and yield was far less from tomato crops grown underneath the fluorescent lights, even when they were also grown in the media bed. Below is an image of the heirloom and bell pepper crops in the media bed: 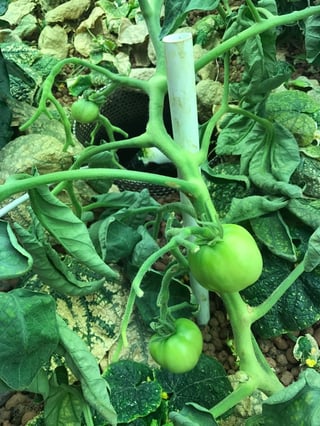 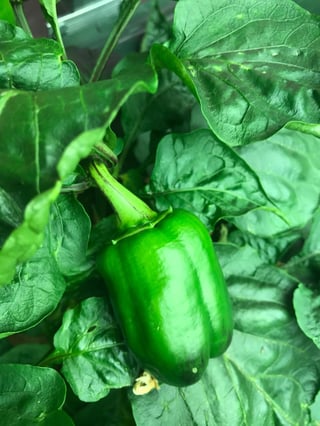 One cherry tomato variety is having the same leaf curling problems as those in the float beds. It is likely that this variety is simple too sensitive for our purposes. The next experiment will help determine specifically the best tomato crops to grow in our system out of a group of 4 different GH varieties.

Surprisingly the cucumbers produced best in the float bed under fluorescent lighting. In fact, float bed production seemed fairly favorable to the cucumber variety we used. The yield between fluorescents and LEDs are very similar but fluorescents had a large yield overall:

All peppers under every light condition are now producing fruits including jalapeño, bell pepper and habanero. A large harvest will be conducted 9/27 of all pepper crops and the yields compared in the next experiments article.

Just as with the tomatoes, the yield difference between fluorescent and LED grown peppers will be compared in the future, likely utilizing the same pepper individuals.

Tomatoes are producing tons of fruit but unfortunately all of the fruit is exhibiting BER (blossom end rot) for unknown reasons as the Ca levels are plenty sufficient. I believe it could be the high transpiration of the tomatoes under the lighting which can cause Ca to bypass the fruit leading to the disorder despite adequate Ca levels. Therefore, the fan has been moved away from the tomatoes to reduce transpiration rates and the water level has also been increased to allow for greater absorption. Below is an image of the BER: 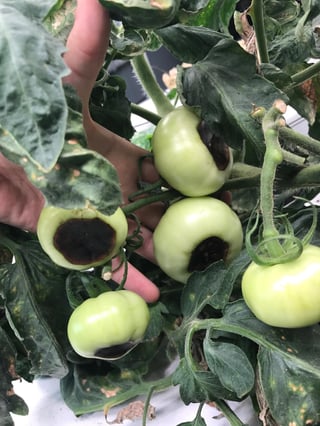 The cucumber crop has produced one medium sized cucumber and nothing more. The crops is close to dying completely. Nutrient levels are simple too high for the variety. The aquaponics system produced far better cucumber yields.

The bell pepper is preforming exceedingly well and is a little further along than the pepper crop which is under the other set of LEDs in the aquaponics system. Below is an image of the bell peppers beginning to form: 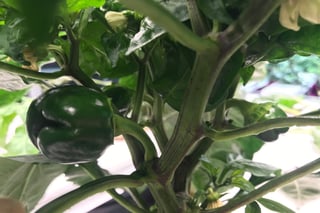 Other leafy greens placed into the system for comparison including swiss chard, chives, basil, mustard greens and collards are all growing very well. The only exception is parsley which died likely because nutrient levels were too strong.

Below is an image of the hydro NFT system with a variety of crops for direct comparison. 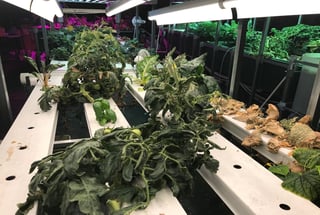 All of the crops outdoors, particularly the tomatoes, are producing higher levels of fruit than those crops indoors  due to the much higher PAR levels available to crops outside versus purely artificial lighting. (indoor -> 12-15 mols/day; outdoor -> about 30 mols/day).

The tomato crops outside has significantly smaller leaves indicating the much higher levels of light the crops receive. The environmental conditions are far superior as well outside with temperatures dropping adequately for proper fruit production and conditions that are better for the leaf structure as well (no curling). Below is an image of one of the tomato crops outdoors: 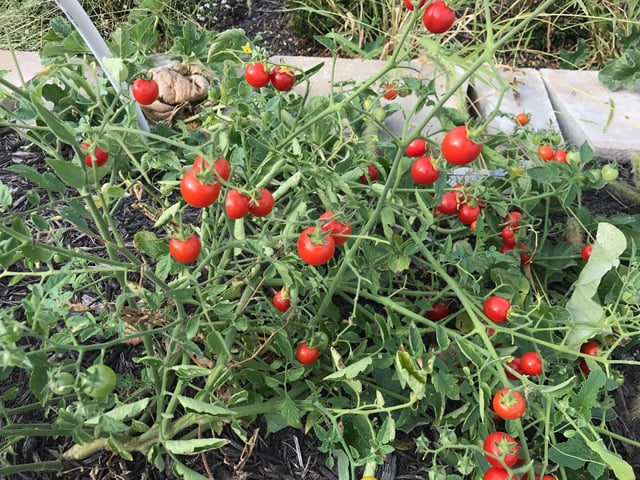