Water Quality Overview:  It has been 17 days since restarting the system and significant nitrification is now occurring. Ammonia levels starting dropping after 12/27, one week after restarting the system, and the nitrite levels started dropping after 12/30. Overall it took 10 days for the bacteria to effectively colonize and preform full nitrification. It’s plain that bacteria responsible for the first step of nitrification (ammonia to nitrite) manifest more rapidly than the bacteria responsible for the second step of nitrification (nitrite to nitrate). 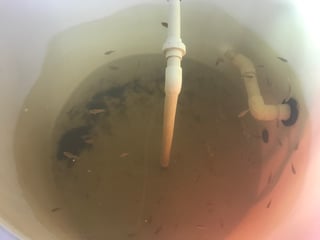 Fish Update: The blue tilapia are still growing rapidly and after another week are averaging about 2.275” or 3 grams. They are being fed between 7-10% of their total body weight currently until they reach 10 grams in size at which point the % body weight fed will be reduced to 7%. The small frys had no observable issue handling total ammonia levels up to 2.0 mg/L and nitrite levels over 5 mg/L.

Dried kelp was added to the fish feed in a 30/70 ratio (30% kelp, 70% fish feed) to increase the level of trace elements and micronutrients in the system.  The tilapia seem to have no issue with eating the kelp directly which is why it has been added to the feed. Kelp can also be added directly to the system and will release trace elements over time. Below is an image of the fish feed with dried kelp mixed in. 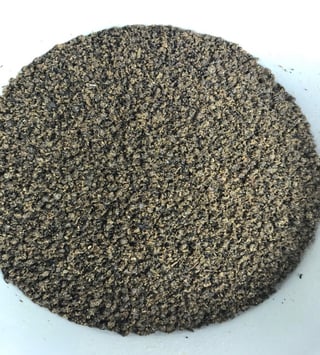 Crop Update: Below is another comparison of tomato seedlings grown in the system with very low nutrient content and in the bucket testing area with high nutrient content. The tomato in the media bed (far left) is exhibiting extreme nutrient deficiencies particularly iron, phosphorous and potassium. The tomato on the far right is being grown in the bucket and is showing much better color, growth and quality. 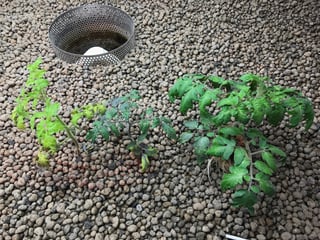 Now that the system has the full ability to convert waste into plant available nutrients one of the float bed trays (18 crops) was filled with arugula. Arugula is a light feeding crop and is good to grow during the early stages of running the system when the nutrient concentration is too low for other crops. The arugula will be grown in a staggered fashion. Below is an image of the seedlings.

Bucket Testing Station: There are five buckets in this area. The first three are tomatoes, the fourth is an artichoke and the fifth is asparagus. Two of the tomato buckets are using highly concentrated aquaponics nutrient solutions whereas the remaining bucket is using a hydroponic nutrient blend. The first aquaponics based tomato bucket has extra phosphorous added. These three buckets can then be compared over time to observe any difference in growth.

The artichoke is having trouble growing and despite being supplemented with phosphorous and potassium is still exhibit strange deficiency like symptoms. If they continue the crop will be transferred to a hydroponic solution. The asparagus still appears to be growing well. Below is an image of the bucket crops.